This project was inspired by two classes that I took. The first was Introduction to Complex Systems, which I took my senior year in high school. It was a sort of review of a lot of interesting high level math concepts, we spent a while talking about fractals and the mandelbrot set, and then moved on to what really interested me, cellular automata.

The idea of cellular automata is to make a lot of little cells that follow some relatively simple rules, but when you watch their overall behavior over a lot of iterations some interesting patterns form. The most famous example is conway's game of life.

The second class, which I took my freshman year of college was Differential Equations 2. In this class we modeled a lot of random things t demostrate differential equations and one such model was the populations of predators and prey living in the same area. If you fiddle with the constants in the model just right you can end up with two sinusoidal populations with the prey wave lagging the predator wave a little bit. The idea is that when there are a lot of predators, they kill off the prey, but when the prey populations gets so low, the predators begin to starve, so the prey have time to reproduce and so on.

So one day in DE2 I began to drift off and came up with the idea of making a predator prey simulation using cellular automata, and this is the result.

This idea of a food reserve seems a little funky, why not just directly feed the ones who earn the food? Well, when I tried to implement it like that, the predators on the inside of a large group would always die. I implemented this concept of food reserves to prevent that from happening.

The first example is one of my first simulations. It actually started with 3 species, 1 predator and 2 prey, but it ended up with just pred and prey 2 fighting it out. I think this was the first time I got any sort of oscillations, so I was very excited. 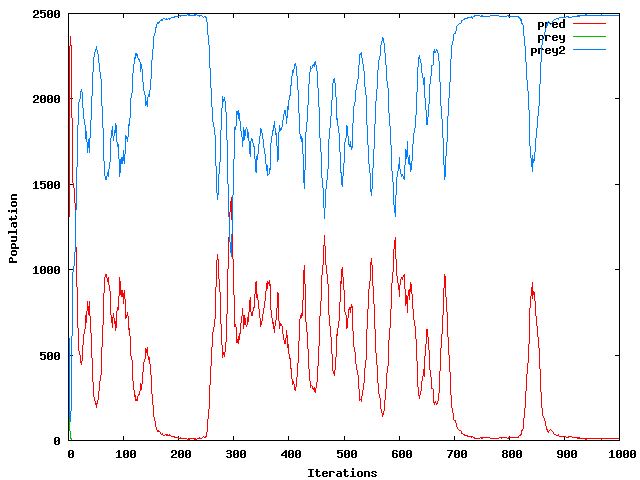 I'm not entirely sure what is going on in the second one, but it looks kind of interesting. 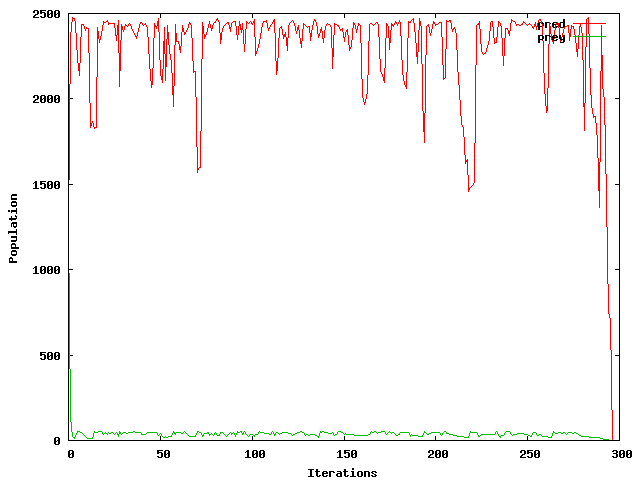 In the third one, species 10 has a carnivore fitness of 1 and herbivore fitness of 0, species 9 has .9 and .1, 8 has .8 and .2, etc. I ran a bunch of simulations with these settings, and usually one species would just end up "winning", but this time I ended up with 4 oscillating species - really cool. 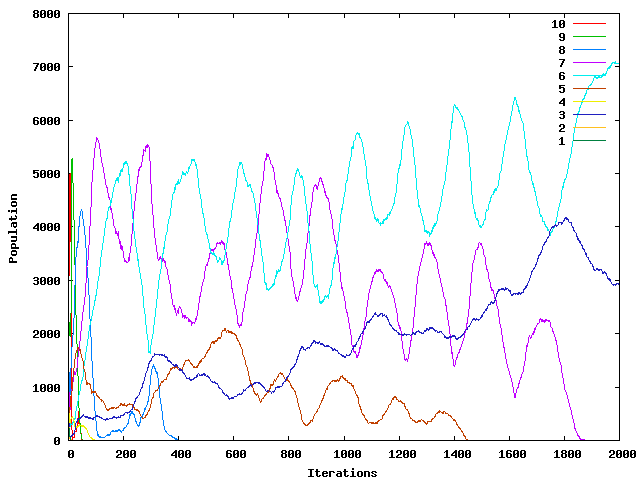